Model parallelism is a standard paradigm to decouple a deep neural network (DNN) into sub-nets when the model is large. Recent advances in class parallelism significantly reduce the communication overhead of model parallelism to a single floating-point number per iteration. However, traditional fault-tolerance schemes, when applied to class parallelism, require storing the entire model on the hard disk. Thus, these schemes are not suitable for soft and frequent system noise such as stragglers(temporarily slow worker machines). In this paper, we propose an erasure-coding based redundant computing technique called robust class parallelism to improve the error resilience of model parallelism. We show that by introducing slight overhead in the computation at each machine, we can obtain robustness to soft system noise more…

Model parameter synchronization across GPUs introduces high overheads for data-parallel training at scale. Existing parameter synchronization protocols cannot effectively leverage available network resources in the face of ever increasing hardware heterogeneity. To address this, we propose Blink, a collective communication library that dynamically generates optimal communication primitives by packing spanning trees. We propose techniques to minimize the number of trees generated and extend Blink to leverage heterogeneous communication channels for faster data transfers. Evaluations show that compared to the state-of-the-art (NCCL), Blink can achieve up to 8x faster model synchronization, and reduce end-to-end training time for image classification tasks by up to 40%.

Many companies provide neural network prediction services to users for a wide range of applications. However, current prediction systems compromise one party’s privacy: either the user has to send sensitive inputs to the service provider for classification, or the service provider must store its proprietary neural networks on the user’s device. The former harms the personal privacy of the user, while the latter reveals the service provider’s proprietary model. We design, implement, and evaluate Delphi, a secure prediction system that allows two parties to execute neural network inference without revealing either party’s data. Delphi approaches the problem by simultaneously co-designing cryptography and machine learning. We first design a hybrid cryptographic protocol that improves upon the communication and computation costs over more…

(This article was authored by Sanjay Krishnan, Zongheng Yang, Joe Hellerstein, and Ion Stoica.) What is the role of machine learning in the design and implementation of a modern database system? This question has sparked considerable recent introspection in the data management community, and the epicenter of this debate is the core database problem of query optimization, where the database system finds the best physical execution path for an SQL query. The au courant research direction, inspired by trends in Computer Vision, Natural Language Processing, and Robotics, is to apply deep learning; let the database learn the value of each execution strategy by executing different query plans repeatedly (an homage to Google’s robot “arm farm”) rather through a pre-programmed analytical…

We release new benchmarks in the use of deep reinforcement learning (RL) to create controllers for mixed-autonomy traffic, where connected and autonomous vehicles (CAVs) interact with human drivers and infrastructure. Benchmarks, such as Mujoco or the Arcade Learning Environment, have spurred new research by enabling researchers to effectively compare their results so that they can focus on algorithmic improvements and control techniques rather than system design. To promote similar advances in traffic control via RL, we propose four benchmarks, based on three new traffic scenarios, illustrating distinct reinforcement learning problems with applications to mixed-autonomy traffic. We provide an introduction to each control problem, an overview of their MDP structures, and preliminary performance results from commonly used RL algorithms. For the purpose more…

We show that deep reinforcement learning is successful at optimizing SQL joins, a problem studied for decades in the database community.  Further, on large joins, we show that this technique executes up to 10x faster than classical dynamic programs and 10,000x faster than exhaustive enumeration.  This blog post introduces the problem and summarizes our key technique; details can be found in our latest preprint, Learning to Optimize Join Queries With Deep Reinforcement Learning. SQL query optimization has been studied in the database community for almost 40 years, dating all the way back from System R’s classical dynamic programming approach.  Central to query optimization is the problem of join ordering.  Despite the problem’s rich history, there is still a continuous stream…

Parametrized Hierarchical Procedures (PHP) represent a program as a hierarchy of procedures that call each other, each implemented by a neural network. We develop an algorithm for training PHPs from a set of supervisor demonstrations, only few of which are annotated with the internal call structure.

This blog post was originally posted here. View the code on Gist.

In this blog post we introduce Ray RLlib, an RL execution toolkit built on the Ray distributed execution framework. RLlib implements a collection of distributed policy optimizers that make it easy to use a variety of training strategies with existing reinforcement learning algorithms written in frameworks such as PyTorch, TensorFlow, and Theano. This enables complex architectures for RL training (e.g., Ape-X, IMPALA), to be implemented once and reused many times across different RL algorithms and libraries. We discuss in more detail the design and performance of policy optimizers in the RLlib paper. What’s next for RLlib In the near term we plan to continue building out RLlib’s set of policy optimizers and algorithms. Our aim is for RLlib to serve… 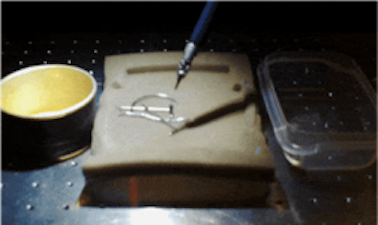 DDCO learns form demonstrations continuous control skills parametrized by deep networks, their termination condition, and high-level policies to use them.

On May 2, RISELab and the Berkeley DeepDrive (BDD) lab held a joint, largely student-driven mini-retreat. The event was aimed at exploring research opportunities at the intersection of the BDD and RISE labs. The topical focus of the mini-retreat was emerging AI applications, such as Reinforcement Learning (RL), and computer systems to support such applications. Trevor Darrell kicked off the event with an introduction to the Berkeley DeepDrive lab, followed by Ion Stoica’s overview of RISE. The event offered a great opportunity for researchers from both labs to exchange ideas about their ongoing research activity and discover points of collaboration. Philipp Moritz started the first student talk session with an update on Ray — a distributed execution framework for emerging…

We propose a method to optimize the representation and distinguishability of samples from two probability distributions, by maximizing the estimated power of a statistical test based on the maximum mean discrepancy (MMD). This optimized MMD is applied to the setting of unsupervised learning by generative adversarial networks (GAN), in which a model attempts to generate realistic samples, and a discriminator attempts to tell these apart from data samples. In this context, the MMD may be used in two roles: first, as a discriminator, either directly on the samples, or on features of the samples. Second, the MMD can be used to evaluate the performance of a generative model, by testing the model’s samples against a reference data set. In the more…